We were contacted by a researcher at the Origins and Habitability Lab at NASA's Jet Propulsion Laboratory who was doing some experimental work with glass vials to model hydrothermal chimney formation. These vials were  simply  off-the-shelf serum bottles with the bottoms cut off.  Along with the request for more bottles, the researcher sent some pictures of her setup to illustrate the use, which involved some porting  and a need to maintaining an anoxic headspace. 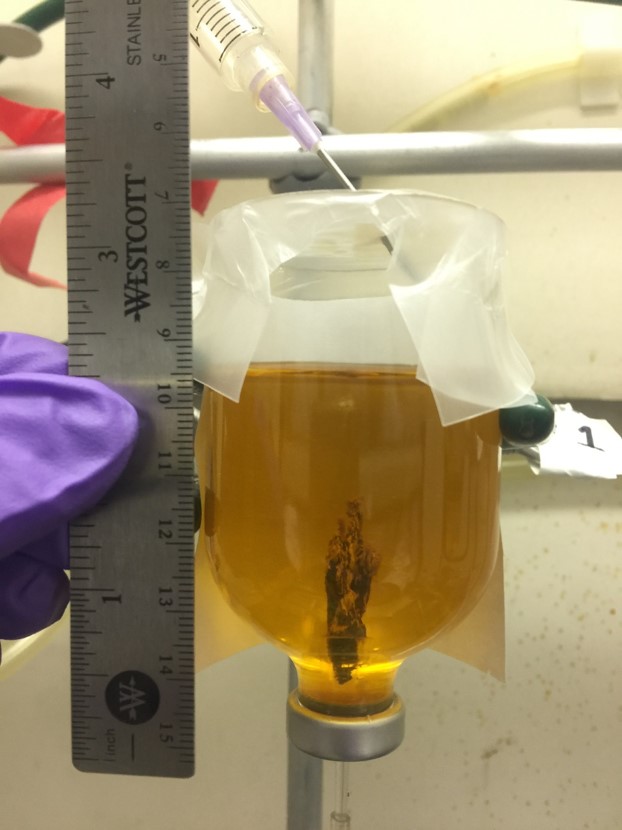 Seeing the setup prompted some suggestions, and a proposal for a more functional vessel; the collaboration is shown on the right.  We sent it out for a trial run, which proved successful,  and were happy to take an order for more.

This is not a complicated piece of glassware, but the application is interesting and fun. It is gratifying to be filling this special niche, which continues to be endlessly varied.

These vessels  feature  GL14 threaded ports, and a bottom port that utilize a "collet" style insert that makes holding and adjusting the plumbing easier than the previous crimp style closure. In an effort to maintaining a cost effective vessel, we used a simple top formed from a disc with a rolled-down edge. The non-glass components are stock items, and help complete the assembly. 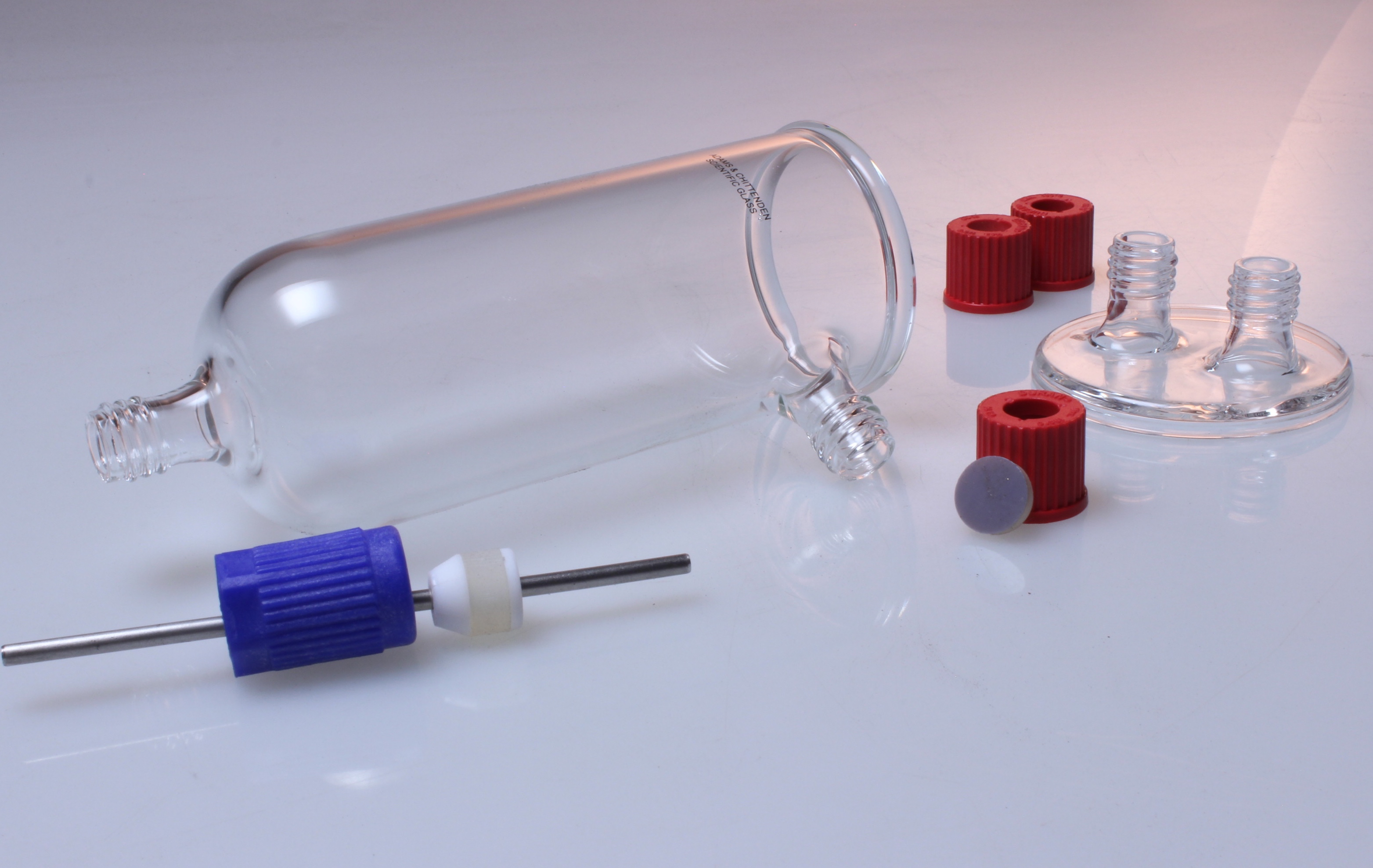 Dr. Barge graciously sent along this background information;
"This glassware is used to grow simulated hydrothermal chimneys by an injection method. These experiments simulate the mineral precipitates that form in seafloor systems, when hot hydrothermal fluid feeds through cracks in the ocean crust into the surrounding seawater. Hydrothermal chimneys are important for astrobiology since they are habitats for life in Earth’s oceans and, 4 billion years ago, may have been environments for prebiotic chemistry and the origin of life. Hydrothermal vents may also be present on other worlds such as the ocean world moons of the outer planets. By simulating chimneys in the lab using this setup, we can study systems with chemistries we cannot observed in the field – such as early Earth, ocean worlds, or early Mars; as well as control the system in order to make in-situ measurements.  In this experiment a syringe of simulated hydrothermal solution is slowly injected through the bottom port into a reservoir of simulated seawater, with an inert gas headspace to simulate the early Earth’s atmosphere. The side port allows for electrical feed throughs to conduct electrochemical experiments with the chimneys."

Shown below; Mg-silicate chimney without wires. 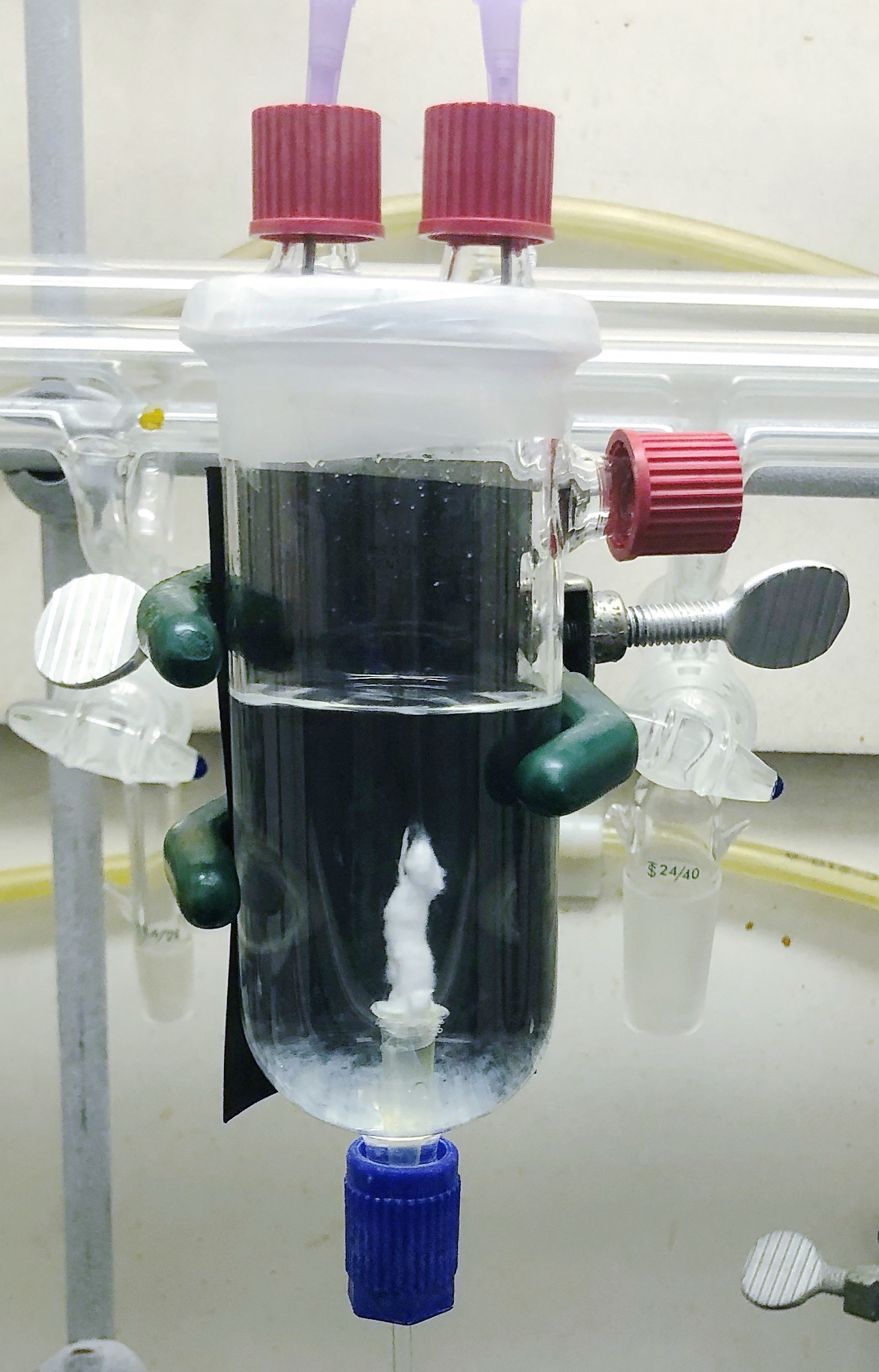 Many thanks to Dr. Barge! Find out more about her and her team at The Origins and Habitability Laboratory 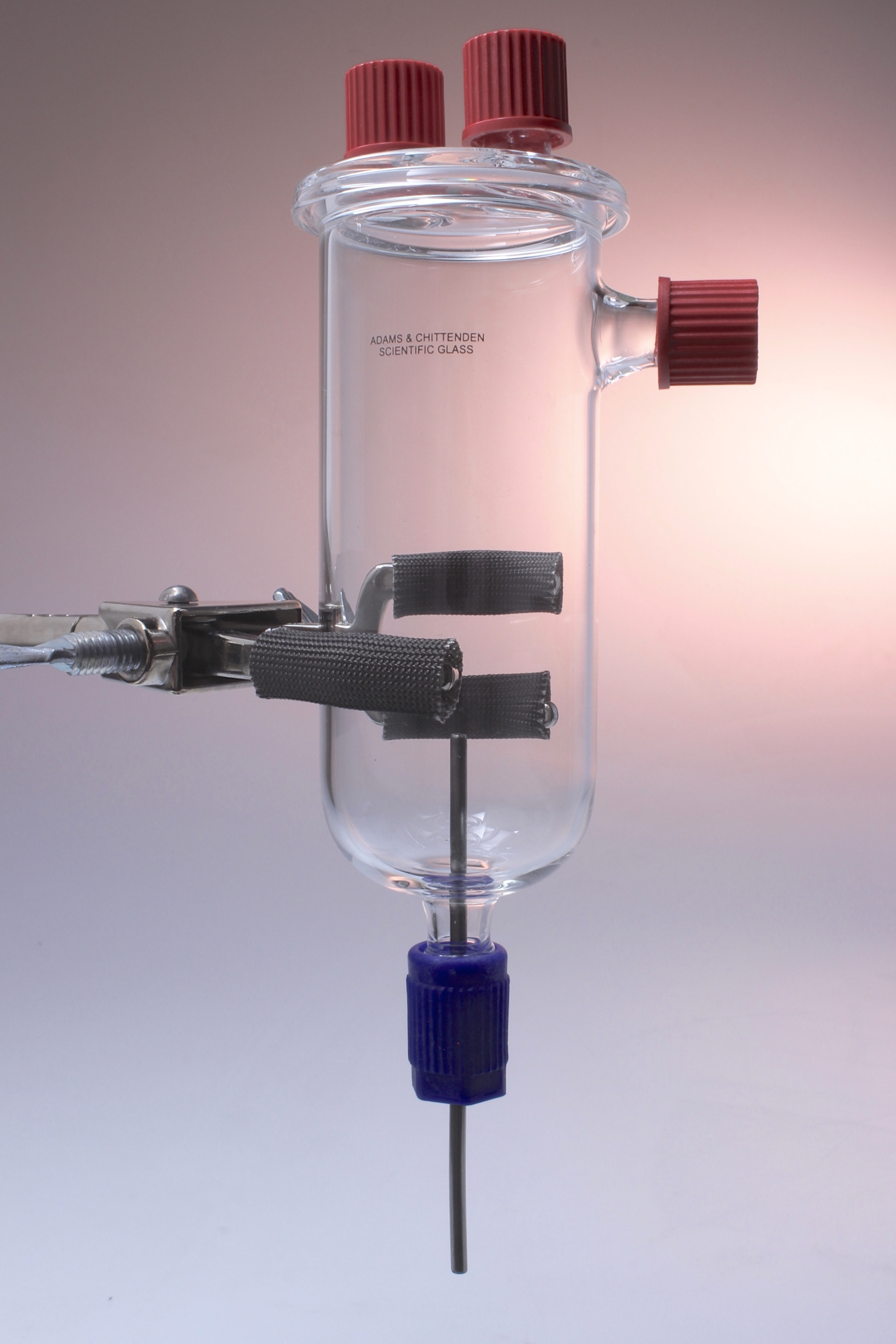 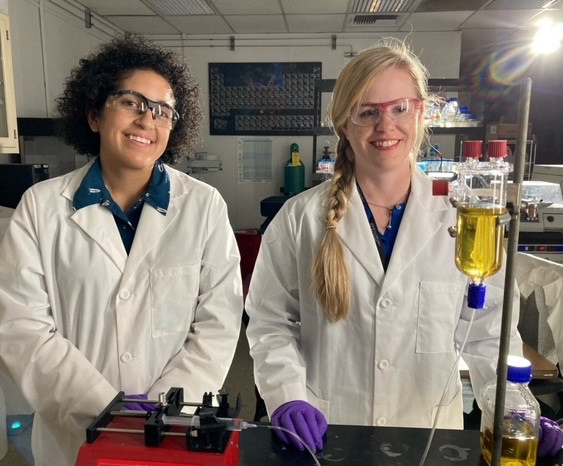 Researchers Julia Chavez and Dr. Laurie Barge in the lab. 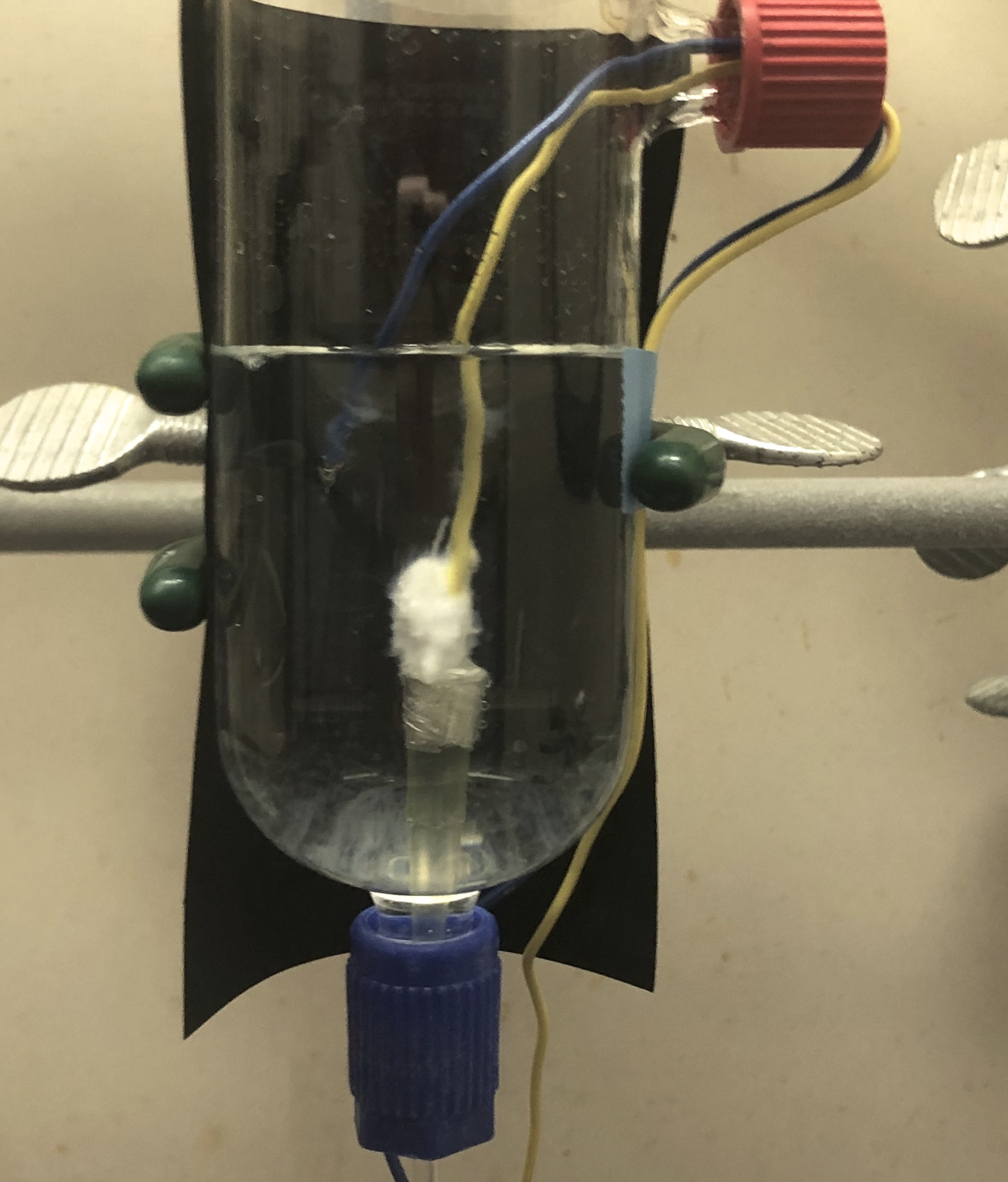 Mg-silicate chimney with wires to measure voltage.
This chimney is meant to simulate an alkaline vent on early Mars.

This is an iron hydroxide chimney that represents a hydrothermal vent on the early Earth, when the oceans were rich in dissolved Fe2+. 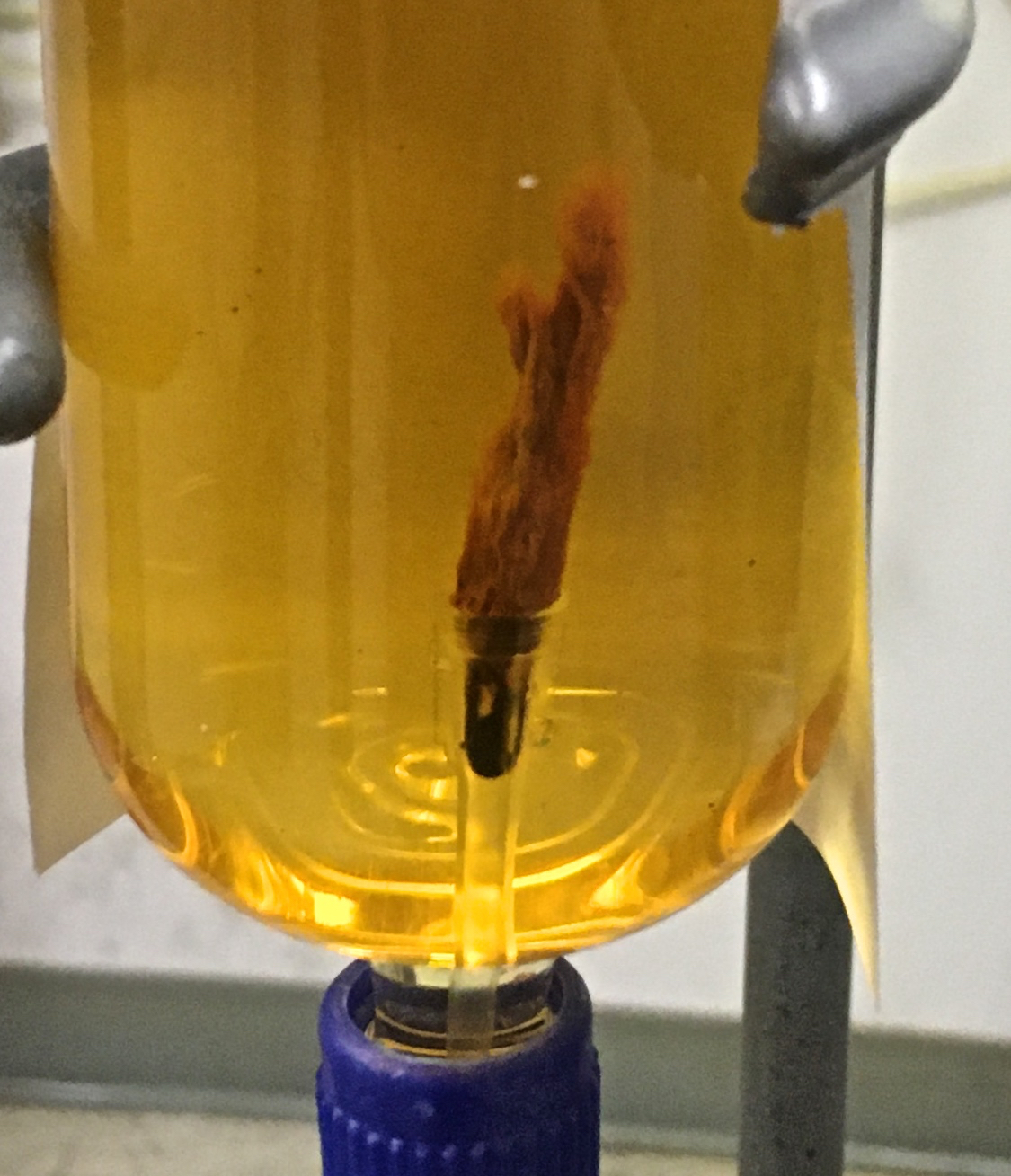