We started up in West Berkeley, California, as Adams & Chittenden Scientific Glass in the fall of 1993. In the winter of 1997 we moved to our current, expanded facility. Our location in the San Francisco Bay Area has brought us into contact with a wide variety of glass users and we've benefitted from the diversity of work being done here. We have been accumulating glassblowers and equipment, and are constantly learning about new applications for glass and better ways to serve our customers.

Tom Adams (on the left) graduated from the University of California at Berkeley with a degree in Physics. Tom began scientific glassblowing in 1971 at R & D Glass in Berkeley, eventually becoming production manager. He has long experience in design and fabrication of all varieties of scientific and laboratory glassware. He lives with his wife, and several sea kayaks in Richmond. He enjoys folkdancing and paddles his kayaks on the San Francisco Bay and environs (check out Bay Area Sea Kayakers). Tom retired at the beginning of 2022, but is still on a short tether for advice and heckling.

George Chittenden (on the right) graduated from San Jose State University with a degree in Art, specializing in ceramics and glass. He apprenticed in scientific glassblowing for four+ years with Willem Van Bragt at Selectro Scientific Glass in Sunnyvale. In 1984 he moved to R & D Glass, where he worked until mid-1993 as a primary glassblower in all facets of custom and production glass fabrication. He combines his love of glass with a lifelong pursuit of music. He is responsible for the photography on this site. And he is not so far behind Tom.... 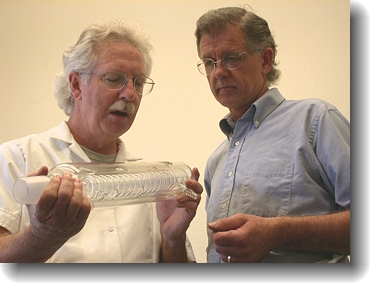 After a quarter of a century of providing our glassblowing services to scientists, researchers, and glass users all over the world, we have transitioned our business to a California Cooperative Corp. As of June, 2019, Tom and George became members of the coop. We were able to do this with the help of Project Equity, a non-profit dedicated to helping companies like ours transition to worker ownership as a solution to original owner retirement. This also helps keep the local economic diversity viable by not simply shutting down the business. We have received some press about this transition in the Huffington Post, Yes!, IndustryWeek, and the SF Chronicle.

We have also been featured in the press generally from time to time.  Some examples; an article in Modern Farmer (!), Wall Street Journal,  and in Scientific American's blog "Symbiartic "The art of science and the science of art." We have been profiled by the Early American Pattern Glass Society;  Link to the PDF here.

We remain members in good standing with our national organization, The American Scientific Glassblowers Society.

We are supporting members and participants in WEBAIC, the West Berkeley Artisans and Industrial Companies, who continue the effort to maintain a sustainable urban environment in West Berkeley - a place for all of us to thrive.

We are proud to appear in "Made in Berkeley", a short film about industry and vision. Action footage includes bread makers, welders, and harpsichord building, in addition to ~6 seconds of (exciting!) scientific glassblowing; and that is just from our block!! Bravo to the filmmakers for a well made film, and making the important argument for diversity in an urban environment.