A client producing robotic systems for sterile injectable manufacturing equipment is developing an improved sterilization process for their aseptic vial filling chambers. Hydrogen peroxide vapor has been shown to be highly effective in terms of microbial kill rates and is also environmentally friendly. The method (as described in PDA Journal, Vol.55, No.1) depends on ensuring a full saturation of the carrier gas stream and the elimination of aerosol droplets which might otherwise interfere with the calibration.

They approached us for a bubbler that would generate the H2O2 vapor and sent along a good sketch as well as the thesis describing the method. It didn't take long to dial-in an economical approach for the fabrication.

The glass frit through which the air carrier is passed is designated Fine for pore sizes of 4 to 5.5 microns, to produce very small bubbles. The tube extending above the frit provides a long path, so as to maximise the exposure of the bubbles to the solution, and then wider at the top to minimise the chances of any resulting foam.This ensures that the carrier gas becomes fully saturated with H2O2 vapor on its passage through the solution.

The column needs to support and seal a PTFE microporous membrane filter at the top of the unit to separate aerosol droplets from the vapor. We encounter quite a number of requests for glassware that can support and seal various membranes effectively, and the NW series of glass flanges and sealing components have proven up to the task. An NW40 flange has been utilzed in this bubbler for the membrane mount. 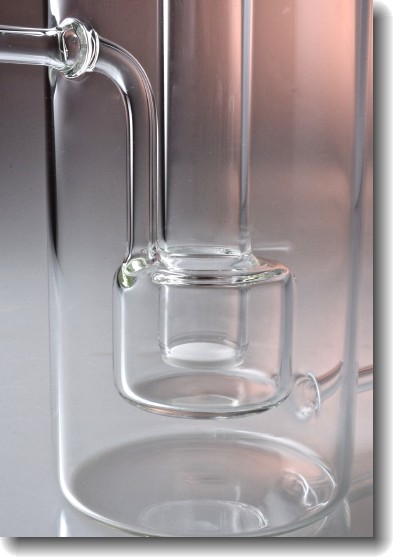